The international KotorArt festival and the 17th Don Branko Music Days will be held from July 13th until August 13th and it has its grand opening at the square in front of St Tryphon’s  Cathedral. At the concert, which was performed by soprano Natalija Radić, narrated by Antonije Pušić, Festival Orchestra of KotorArt and conductor Premil Petrovic, the audience will have an opportunity to listen to the premiere of the work "Stella’s Passion" and “The Immortal Ray” by Ivan Marović. At the end of the program there will also be a screening of the film by Dušan Vuleković, which was also commissioned by the organizer.

Premil Petrović is the initiator and art director of "No Borders Orchestra" a recognizable brand on the European culture scene and with whom he made an album in 2015 for the label “Deutsche Grammophon”. He graduated conducting at the Hochschule für Musik "Hanns Eisler" in Berlin as part of the class of Professor Winfried Müller. His repertoire includes interpretations of old music, opera and symphonies of classicism and romanticism, as well as the premiere of contemporary music. He conducted in Vancouver and in Philadelphia opera, “Colon Theatre” in Buenos Aires, Philharmonic Orchestra of Cape Town, Oakland Philharmonic Orchestra and many European Orchestras.

This will be your second performance at the KotorArt festival. How do remember your last performance here?
I have only fond memories of KotorArt because it was the first festival for newly founded "No Borders Orchestra" and here is where we started our regional tour which ended in Ljubljana. We made our first CD there and it was published by “Deutsche Grammophon”. We also signed an exclusive contract with the Universal Music.

Montenegro has a special place in your career?
Absolutely. Montenegro has got a very special and dear place in my career. Theater City Budva was for example the first ever festival where I conducted and that was 22 incredible years ago. I conducted Mozart’s opera “Bastien and Bastienne”. 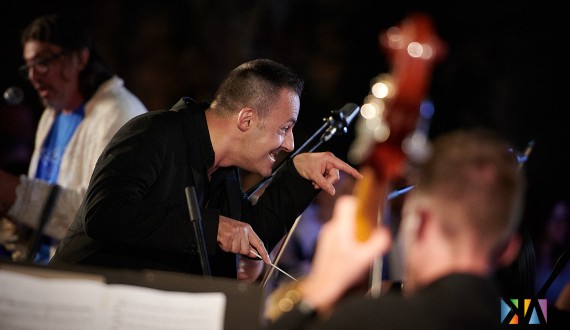 You’ve had the opportunity to take part in many festivals across Europe. How do you rate KotorArt comparing to these festivals?
KotorArt is a festival with a high artistic, program and conceptual integrity. And integrity is something very rare and important nowadays. I understand how hard it is to find interest and understanding for culture in this region and how difficult it is to provide funding of this kind of festival. I admire people who are running KotorArt and their struggle for preserving the culture and the quality of this festival.

At the grand opening we will have an opportunity to listen to the composition by Antonije Pušić, better known as Rambo Amadeus. Have you had similar experiences so far – have you performed work not written by classical composers?
I don’t make difference between classical and non-classical composers. When the sheet of music is in front of me, it is only the music itself that matters. Rambo is a total genius and I have a lot of confidence in him. By working on it until the last moment, Rambo keeps the tradition of the greatest composers in the history of music. For example, Mozart composed the Overture for his operas often on the day of the premiere.

There are works of different styles and genres on your repertoire, as well as numerous premieres of contemporary music. What is the bigger challenge? Premiere performance or presentation of "old" works in a different way?
In purely technical terms, contemporary music is more demanding than traditional. These challenges can also be exciting to overcome. Also, the challenge is how to put something that is hermetical and often directed to a small number of experts and listeners interested in contemporary music and present it in a way so that it communicates with a wider audience. However, I believe that all music is contemporary. Even Beethoven is our contemporary. Famous conductor Simon Rattle once told me: "The most important thing for conducting is to stop conducting and become a composer." So, do not interpret something that has long been written, but create that music on the spot, compose it here and now.

You are actively involved in production and performance in experimental music theaters. Do you like working with artists from other areas?
Yes, I am definitely interested in cooperation with contemporary artists and directors and to work on something together. Discovering new possibilities of art created by that common work as well as discovering new spheres you never knew existed.

You are the winner of the "Hanns Eisler" award for performance of contemporary music. Has anything changed in your professional life after winning this prestigious award?
The awards only mean that someone has recognized your quality and that the work you do means something to someone. I think that the success as such is an empty place. It is important what you do with it. Success is only meaningful if it brings new possibilities and enables bigger professional freedom. Otherwise it’s an empty concept just like failure. 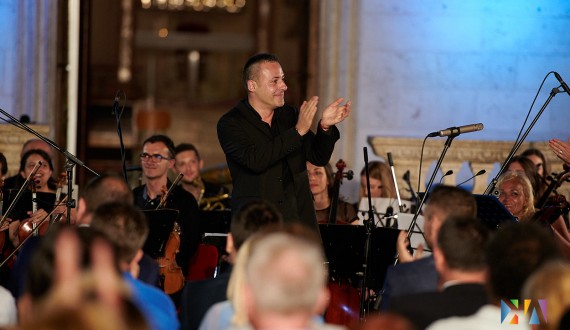 You’ve said that the goal of the "No Borders Orchestra" project is a call for communication through the symphony orchestra. How would you grade that communication now, six years later?
Communication in our ensemble is excellent! However, you are not asking me about the communication in the region. I think that it is worse than it was a couple of years ago. From the news we get from all over the world one can clearly see that what is happening in the Balkans is actually happening in the whole world. In that sense the social aspect of existing of this orchestra in this region is extremely important but also relevant for the entire world. There is so much poison in the world so it is very important for us artists not to contribute it but to do something positive and show what is possible, to be an example and maybe try to change the consciousness.

What are the future plans for the "No Borders Orchestra”?
We are only concentrated on our summer tour in August this year. We are going to have concerts in Budva, Prizren, Sarajevo and Belgrade. Our regional tour entitled “Balkan Season” with which we want to establish an annual summer tour in the region as our main activity will start in Budva.

And your personal plans?
I am recording a CD in Berlin with the "Zafran ensemble" which is a great Berlin ensemble for contemporary music. And in November we will have a concert with “Dresden Sinfoniker” regarding their 20 year anniversary.

You’ve started your student days in Novi Sad, continued in Belgrade and Berlin, you have perfected your craft on many courses … During your school years you’ve had a chance to cooperate with different pedagogues. Do you see yourself as a teacher or pedagogue?
Honestly, I haven’t really thought about it. My life is so fulfilled with conducting and with the "No Borders Orchestra” that it seems I wouldn’t have enough time to be a pedagogue.

Is it still hard not for you to do what you believe in, as you once said?
I don’t know exactly what it means that something is hard and what does it mean to believe in something? I often change my opinion and I am very proud of it. But, the thing that hasn’t changed is that love is that magical, transformative ingredient which makes the impossible things possible. Or should I quote Njegoš : “Let it be what cannot be…”

You have a very adventurous spirit and a curious nature, so once while climbing the Himalaya you walked 200km. Do you spend a lot of time in Asia?
I spent the whole last year in India and Nepal, mostly in the Himalaya region. I have often spent time in that part of the world but it was my dream to spend a year alone in the Himalaya. And I am very happy I achieved it.

Has your life changed since then?
Yes, it has. What I learned there is not a matter of relaxing. Because that relaxation then actually becomes a kind of additional activity, a kind of new stress. The thing is to just let go of things that make you stressed, actually our thoughts and emotions. And the relaxation is automatically there, it is our natural state. And if we want to go a step further, to say it by Buddhist terminology - the point is that we have an insight into the nature of reality and clearly see that there is neither relaxation nor relaxing, nor the one who is being relaxed. But it is necessary to radically overcome all the concepts in which we exist or in which we think we exist.

And which level of relaxation have you reached?
So far I am at the level of not trying to relax.