Three premieres at the opening of Don Branko’s Music Days

The 18th KotorArt Don Branko’s Music Days have officially started on Sunday, July 14th in front of the St Tryphon’s Cathedral in Kotor. The ceremony began with the performance of the national anthem followed by the artistic director of KotorArt, professor Ratimir Martinovic, as well as the Minister of Culture in the Government of Montenegro, Aleksandar Bogdanovic who addressed the audience and visitors from the cultural and public life. 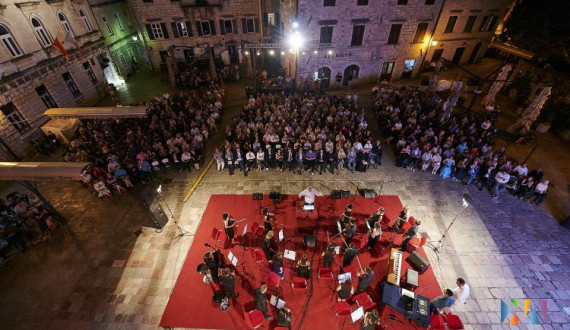 The program of the grand opening was dedicated to two anniversaries: marking four decades since the devastating earthquake that hit Kotor in 1979 and on the other hand four decades since enlisting Kotor on UNESCO’s world heritage list. In his speech Martinović made a connection between the horrific earthquake that hit Kotor, the consequences it had on people’s lives in Kotor and in general and the earthquakes that are still happening today in the field of politics, culture and among people themselves. He underlined three messages one should always bear in mind when it comes to Kotor: admiration, gratitude and dedication.

The artistic part of the program contained three premieres, two music and one film premiere, works commissioned by the KotorArt from Montenegrin authors – composers Ivan Marović and Nina Perović, and a film director Dušan Vuleković. Thus, the Festival continued its long-lasting practice of nurturing the domestic art production which makes it the leading festival in the region. Both music compositions have been written for the voice and orchestra and the honor of opening this year’s KotorArt has been awarded to KotorArt Festival Orchestra conducted by Julio Marić, a Croatian conductor and a Kotor native. 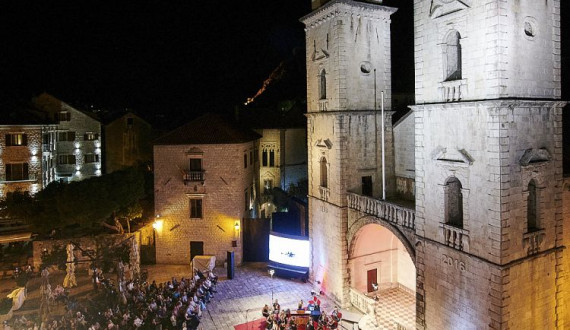 Ivan Marović composed the work entitled Kotor 1979 as an homage to a disastrous earthquake and considering the performing composition, the author combined two starting points in his work: the one directed to the instrumental part, the treatment of the string orchestra and its possibilities in artistic music and the other one directed to the vocal part of the composition following the esthetic frames of the profane and popular style of the hip hop. That is why he had a cooperation with Montenegrin klapa and hip hop duo Who See, Dejan Dedović Deduh and Mario Đorđević Nojz who haven’t only performed the vocal parts but also co-wrote the text. Exactly that crash of different performing approaches has led to the basic characteristic of the work – polystylism with the elements of concrete music (the parts when we could hear the ground shaking or the danger siren) which contributed to a relatively easier communication with the audience. Although the practice of hip hop is specific for its increased emotions, in this case it could mostly be felt from the aspect of literary text while the vocal performance has left the impression of a certain extraction and maybe rightly so considering the time distance regarding the given event.

The other composition was written by the Montenegrin author Nina Perović who graduated from her PhD studies in Belgrade in the class of professor Srđan Hofman. Her work Pogledi was written for the three sopranos and a string orchestra and performed in front of the audience by the sopranos Olivera Tičević, Marijana Šovran and Milica Milanović. With a joyful spirit in its core and relying on the laws of minimalism, the composition has accented one soprano part (Tičević) making itself to a certain extent superior to the other two.  Repetitiveness, present in the orchestra, has taken over the vocal parts, but more in an expressive sense then rhythmical order considering the often-decreasing glissandos symbolically representing the waves.
The grand opening of the Don Branko’s Music Days ended with the screening of the documentary film by Dušan Vuleković called “The Earthquake Stories” where the earthquake witnesses talked about their memories. They witnessed moments that lasted for “only” ten seconds, exactly the length of the earthquake, that felt like eternity, they spoke about life “after” the earthquake and their perception of Kotor today.