The only solo recital at this year’s KotorArt was performed by a young cellist from Armenia Narek Hakhnazaryan, who is often described by the world media as an emerging star. He performed in the Church of the Holy Spirit, on Monday, August 5, in front of a large audience that he quickly grabbed with his talent, interpretation skills and carefully selected program. 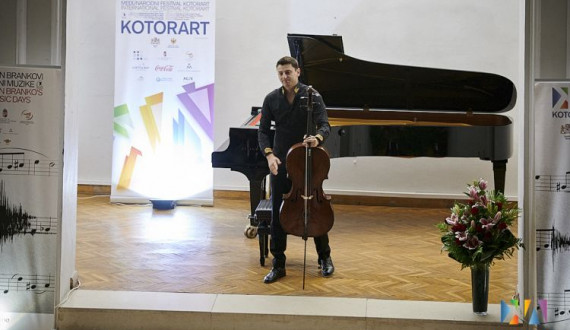 A solo recital, if not a piano one, or possibly a guitar one, is a rarity in itself at festivals around the world, not just in Kotor and Montenegro. There are numerous historical circumstances that have contributed to the cello being experienced primarily in the context of chamber music – string quartet, piano trio, or just with piano, or, on the other hand, in orchestral music. Regardless of the context thus constructed, it is only through a solo recital that the cello reveals its essence. From the melodious and pleasant to the exuberant and penetrating sound, from the lyrical and emotionally expressive to the rhythmically pregnant and dramatic themes, and in all its technical possibilities – that is how the cello sounds in the hands of Narek Hakhnazaryan.
Having chosen the pieces of different historical positions, the musician started the recital with the Solo Cello Suite in G Major, No. 1, one of the famous six suites of the baroque composer Johann Sebastian Bach, to abruptly make a turn to contemporary music with Sonata by György Ligeti. Although apparent, the stylistic contrast was mitigated to the extent to which the young Ligeti softened his modernist view of art by “appealing” to a wider audience through a melodic, almost folklore theme. Through the music by Pablo Casals and Giovanni Sollima, the two artists who occupy a double position – the one of a composer and of a cellist alike, Hakhnazaryan restored the contrast. This time, between the meditative, almost ambient Casal’s Song of the Birds and Sollima’s Lamentatio, a lament which the performer stepped into, as the composer wrote, playing and singing in a neutral, sometimes nasal voice. If the aim of the composer was to assign the voice the role of a non-existent, “fifth” string of the instrument, then Hakhnazaryan definitely succeeded in the task.

Born into a family of musicians, Narek Hakhnazaryan began his music education in his native Yerevan, before continuing at the Moscow Conservatory and the New England Conservatory of Music in Boston. He was also mentored by the renowned Mstislav Rostropovich, from whose Foundation Hakhnazaryan has received scholarships. His international breakthrough came in 2011, when he as a 22-year-old won the XIV International Tchaikovsky Competition. He holds patriotic feelings towards his homeland, so he included in his program at KotorArt a Sonata by the Armenian composer Adam Khudoyan, which was written in memory of the Armenian victims in the First World War, in the so-called Armenian Holocaust. 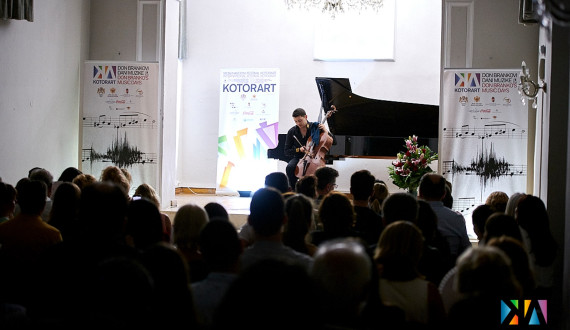 Addressing the audience, the cellist also emphasized what he recognized as common between the peoples of the two states, Armenia and Montenegro. It is not only the beauty of nature, hospitality and sense of humor, but also the events in which peoples have suffered. Drawing a parallel between two devastating earthquakes, in Kotor and Montenegro in 1979 and in Armenia in 1988, Hakhnazaryan also performed as an encore a piece that he dedicated to the memory of all victims. A concisely conceived recital at the Don Branko’s Music Days, with pieces whose short duration only added to the ease of listening, the musician ended with ovations, as he deserved.
Boris Marković